Shopping Basket
Your Basket is Empty
Quantity:
Subtotal
Taxes
Delivery
Total
There was an error with PayPalClick here to try again

Thank you for your business!You should receive an order confirmation from Paypal shortly.Exit Shopping Basket

THE HEAD OF THE ROYAL HOUSE OF GEORGIA MEETS THE PATRIARCH OF THE HOLY CITY OF JERUSALEM –September 13, 2016 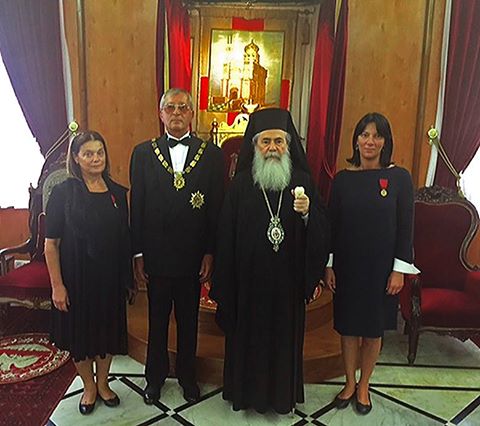 The city of Jerusalem is significant in a number of religious traditions, including the Abrahamic religions Judaism, Christianity, and Islam, which consider it a holy city. Some of the most sacred places for each of these religions are found in Jerusalem and the one shared between all three is the Temple Mount.

It was on 13th September 2016 when the Royal family of Georgia, held in warm and friendly atmosphere, visited the Patriarch. HRH Crown Prince noted an important role of His Beatitude in Christianity as whole and bestowed upon him the highest Dynastic Order of St. King David the Psalmist what was received with much gratitude by the Patriarch of Jerusalem. In his part His Beatitude gifted the royal family with holy icons, souvenirs and blessed the royal family.